By Louise Worden9th May 2016Uncategorised

Impact on financial markets ahead of the EU referendum

The nature of investment is long term. Constantly making changes to take into account short-term events often proves to be counterproductive in the long term. Movements in currencies and shares are often fairly short-lived, as the result of the Scottish referendum showed.

Analysis, predictions and arguments
In the run up to 23 June, we are going to hear all sorts of analysis, predictions and arguments about the likely results of the UK’s EU referendum and the potential implications of a Brexit for the economy. Whatever the individual commentator’s pre-set beliefs, they will likely be able to find some sort of ‘evidence’ to support their view. But the reality is simply that no one can know either the result or how either scenario would play out.
Long term, both the costs and the potential benefits of Brexit to the UK economy are probably exaggerated by commentators and campaigners on either side of the argument.

Investors need to be prepared to view the occasional downturns simply as part of a long-term investment strategy. Historically, the longer you stay invested, the greater the chance of smoothing out investment returns. Of course, it’s worth remembering that past performance is not a guide to what might happen in the future, and the value of your investments can go down as well as up.

Avoid being distracted by ‘noisy’ commentary
No one can predict the outcome of the referendum, and we must avoid being distracted by ‘noisy’ commentary. Even if there is Brexit, it is not clear that there would be significant, permanent investment implications, so it’s important that investors maintain their current view on the UK based on current economic fundamentals.
Recently, the Bank of England (BoE) summarised four decades of research on the net economic benefit of EU membership: the answer was that it was in the range of -5% to +20% of GDP. The net benefit of Britain leaving the EU would be just as difficult to measure, even long after the fact. It is certainly impossible to predict in advance, but the analysis above does highlight some key takeaways for investors.

Past episodes of political uncertainty
We can expect sterling to remain weak for the duration of the campaign. Britain’s reasonably sound fiscal position suggests that gilts would be much less affected, and short-term money market rates are likely to be held down by the BoE’s no-change stance on rates. But, in past episodes of political uncertainty – notably, the Scottish referendum in 2014 – we have seen the yield curve steepen slightly relative to the US, and we could see that happen again if the polls continue to be tight.
Growth and investment is expected to be modestly lower in the first half of 2016 due to the uncertainty created by the vote. But don’t expect this to outweigh more important factors such as growth in Europe and the US and broader sentiment in global markets. Most of these effects should reverse themselves in the event of a Bremain vote. But do not be surprised if sterling ends the year materially weaker, on a trade-weighted basis, than at the end of 2015. And do not be surprised if there is talk of another referendum on EU membership if the June vote is reasonably close.

Broad direction of UK asset markets
In the event of a vote for Brexit, expect these macroeconomic factors to intensify and UK growth to be materially slower than in the no-change scenario. The eurozone would also see a short-term downturn. But, even for the UK, the broader global outlook will be more important to medium-term growth and the broad direction of UK asset markets.

Leaving the EU would no doubt lead to uncertainty in the short term with a knock-on effect on market volatility. But this can be seen as an opportunity too – markets tend to overreact initially which can create opportunities to buy assets at much cheaper prices.

Boosting competitiveness of UK businesses and exports
If the stock market, gilts and sterling do fall initially, they should all bounce back. There is even a view that gilts would perform well, as the BoE might reintroduce Quantitative Easing. If sterling does stay lower, this could be just what the UK economy needs right now, helping to boost competitiveness of UK businesses and exports. The stock market has also tended to rise on sterling weakness, and this pattern might be repeated post-Brexit after an initial bout of uncertainty-induced volatility.

It is also not impossible to see an influx of capital into the UK; global investors might consider a more liberal UK an attractive alternative to the sclerotic eurozone. This could lead to a stronger pound. 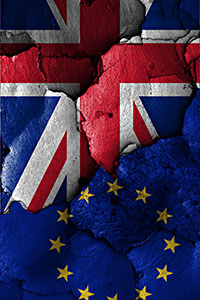