It’s fair to say there was no one else quite like David Bowie. He was truly one of a kind, and his music helped inspire generations of people throughout his illustrious career. However, it would now seem that he could become an inspiration when it comes to estate planning too.

Very few musicians enjoyed lasting careers as diverse, colourful and successful as Bowie. He remained fascinating and cutting edge until the very end in ways that extended far beyond making music.

Bowie passed away from liver cancer a mere two days after the release of his latest album, Blackstar. Knowing that his cancer was terminal, many people believe Bowie intended his last album – featuring lyrics about mortality – to be a farewell. In fact, the song ‘Lazarus’ begins with the line, ‘Look up here, I’m in heaven,’ and ends with, ‘Oh I’ll be free, just like that bluebird, oh I’ll be free, ain’t that just like me?’

Throughout the 1970s and ‘80s, Bowie reportedly struggled financially, even coming close to bankruptcy. He hints at his financial difficulties, again through the lyrics of ‘Lazarus’, singing, ‘By the time I got to New York, I was living like a king, then I used up all my money.’ Bowie married his second wife, Iman, in 1992 and moved to New York soon afterwards. A few years after that, he took control of his financial legacy through a move now considered to be revolutionary.

Bowie Bonds
With the help of investment banker David Pullman, Bowie sold a stake in his catalogue of music. Instead of selling the songwriting, performance and licensing rights to his many successful songs, Pullman helped Bowie create ‘Bowie Bonds’. Through these, Bowie sold – for $55 million – a 10-year investment which operated like an annuity, providing a fixed-rate of return of 7.9%. The payouts were secured by all of Bowie’s royalties and copyrights from his music.

Prudential Insurance Co. of America purchased the Bowie Bonds and was paid off in full during the ten-year time frame. This is despite the change in the music industry brought about by Napster and similar Internet-based music distribution, which dramatically reduced royalties available to songwriters and performers.

Financial creativeness
Pullman was recently interviewed about the financial creativeness that allowed Bowie to achieve security for the rest of his life. Pullman said Bowie did the arrangement not to protect himself but for the benefit of his family: his wife Iman; their daughter, Alexandria (who is now 15); and Bowie’s son from his first marriage, film director Duncan Jones. Pullman said that Bowie was interested in estate planning at a young age and wanted to make sure that his assets passed on to his family. He did the Bowie Bonds transaction both for tax savings and so that his estate would benefit from his music catalogue.
According to reports, Iman will likely receive the lion’s share of Bowie’s financial empire, which is estimated to be in the region of $200 million, before factoring in the expected spike in sales that inevitably occur when an iconic singer passes away. Bowie’s two children will also each receive substantial bequests.

Maximising the value of assets
At the time of going to press, the details of Bowie’s estate plan have not been made public. Given the reports about Bowie’s advanced planning and financial foresight, it is likely that he used one or more revocable or irrevocable trusts. If so, not only could Bowie have maximised the value of assets passing on to his heirs in the most tax-efficient manner permitted by law, but also his assets could pass privately without the public scrutiny that goes along with probate court. In other words, the public may never know the specifics of how Bowie’s assets will be distributed.

Many musicians fail to do proper estate planning, often relying only on a will, which becomes a public document once it is filed with the probate court after death. Or, even worse, many have no estate planning at all. The heirs of John Lennon, Jim Morrison and Kurt Cobain all went through messy estate battles that could have been prevented if those music legends had used the same foresight as David Bowie did. 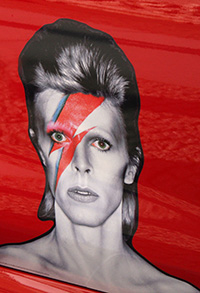