The Chinese New Year, also known as ‘Spring Festival’ in China, is China’s most important traditional festival. The 2016 Chinese New Year, ‘The Year of the Monkey’, commenced on Monday 8 February. Monkeys in the Chinese zodiac are ‘clever, mischievous and curious’, so we’ll have to see if this brings about a luckier year for Chinese financial markets.

Certainly, fund managers investing in China are proving sanguine. The Association of Investment Companies (AIC) has collated views from investment company managers on China, and one consistent theme is that the spectacular growth story of the past should not cloud judgement on the China that we see today.

Dale Nicholls, Manager, Fidelity China Special Situations said: ‘China continues to grow at a better pace than the developed world, and personal consumption is likely to outpace this rate of growth as the economy transitions towards a consumer-led market. I remain positive about the prospects for China. I consider it to be a market with great potential brought down by macroeconomic concerns over the short term. I would agree that the pace of reforms in China has been disappointing, and in some cases, such as currency depreciation, the timing and communication could have been better. Having said this, China’s decision to move towards a more flexible currency is a long-term positive. In my view there is potential room for positive surprises going forward, and this prevalent sentiment creates opportunities in areas such as A-shares, where I am finding some large-cap strong businesses at reasonable prices.

‘It is interesting to witness changes driven by increasing penetration of the Internet, particularly as a vehicle to reach previously untapped markets. For instance, while traditional retail networks have still to establish a rural footprint in China, e-commerce has already ensured that both goods and services are now accessible to a wider rural and middle-class audience. As people get wealthier, demand for better quality goods and services is also on the rise in areas such as health care and education. This is creating several opportunities for the fund.

‘I also think there are fewer reasons to worry about the Chinese property market considering overall affordability trends – recent interest rate cuts only help this, and the Chinese consumer balance sheet is in good shape. However, I remain concerned about corporate balance sheets in China, where debt has grown substantially. I also remain cautious towards banks, as I maintain that the full extent of their non-performing loans is not fully recognised.’

Howard Wang, Manager, JPMorgan Chinese Investment Trust said: ‘It’s important for investors to acknowledge and be comfortable with China’s slower growth. Many secular growth opportunities with strong multi-year prospects still exist across Chinese equities, especially in the “new economy” sectors of healthcare, Internet, consumption and environmental protection. We have long acknowledged the imbalances in China and the transition away from an industrial- and manufacturing-based “Old China” to a services- and consumption-driven “New China”.

‘Near-term sentiment will therefore remain volatile during this growth transition. While going through market corrections may not be a pleasant experience for investors, we do not believe the corrections are reflective of a wider deterioration in company fundamentals.’
Ian Hargreaves, Manager, Invesco Asia explains: ‘I have just returned from a research trip to China and found nothing to suggest that the economy is deteriorating at a more rapid rate than we have seen so far. Neither did I find any evidence of new factors undermining the resilience of the consumer and service sectors.

‘Concerns over renminbi (RMB) depreciation have contributed to recent market weakness. Unfortunately, the Chinese Government’s decision to change the RMB pricing regime so as to measure it against a trade-weighted basket – which we consider to be a sensible change – was poorly communicated, allowing talk of declining FX reserves and capital flight to heighten investor risk-aversion. The People’s Bank of China has now issued clearer guidance, although we should be braced for several months of large declines in reserves as Chinese companies seek to repay unhedged foreign debt. Furthermore, I expect that the RMB market will gradually stabilise, as China’s external position appears sound compared to many emerging market countries – foreign debt/GDP is low at 10%, while its trade surplus is currently 5% of GDP.

‘Of greater concern is the level of domestic debt-to-GDP in China, which is high and continues to rise. However, I believe we are still some way from reaching the banking system’s liquidity limits. This is important as it should buy some time for the Government to begin to deliver on its supply-side reform agenda, which many are sceptical about given the lack of progress in reducing overcapacity in recent years. Such scepticism may be too pessimistic, as we are starting
to see some positive developments such as: moves by the Government to prepare for the social consequences of capacity closures; acceptance that some companies will have to go under; and evidence of action in the worst affected sectors like steel, coal and cement.

‘However, local governments have a leading role to play in this process, and there is still no clear way for them to be incentivised. Furthermore, progress in reform will do nothing to aid growth in the near term, although if the market believes action to be far-reaching enough then that could be positive for share price valuations. The challenge, as I have found with India in the last 18 months, will be judging what constitutes significant reform and what doesn’t.’

Mark Mobius, Executive Chairman, Templeton Emerging Markets Group and Co-Manager of Templeton Emerging Markets Investment Trust said: ‘We think the type of market volatility we have seen is likely to continue this year, and not only in China. Volatility is increasing in many markets, and it’s something investors will likely need to learn to live with. We view periods of heightened volatility with the lens of potential investment opportunities, allowing us to pick up shares we feel have been unduly punished. In the case of China, the Government’s efforts to maintain stability on the one hand and to allow a freer market on the other is a difficult balance to achieve.

‘That said, we are not terribly concerned about growth in China, nor its long-term investment prospects. We would dub current 2016 projections of about 6% in gross domestic product growth as quite strong, given that the size of the economy has grown tremendously in dollar terms from that of a few years ago when growth rates were stronger but with a smaller base. This is an aspect we think many investors may be missing when they see growth slowing. The fundamentals in China are still excellent, in our view. It is one of the fastest-growing economies in the world, even if the growth rate has decelerated.’

Ewan Markson-Brown, Manager of Pacific Horizon said: ‘China is amidst its great transition from an investment-led economy to a service-led economy, with services growth accounting for 80–90% of recent GDP growth (Sept 2015), which is being driven by the smartphone revolution that is allowing the online economy to boom. However, the cost of this technological disruption is severe and is creating permanent relative price destruction within the industrial and commodity sectors of the Chinese and the world economy. Currently, the market is focusing on the losers of this transition where the majority of the recent growth in Chinese debt has gone; we expect in time the market to turn back its attention to the long-term service-oriented winners.’ 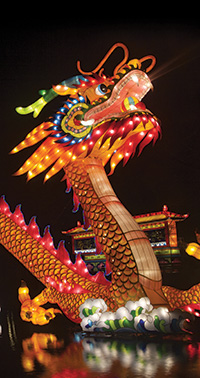